The only goat color that may be as common as white is black. In fact, if you have ever seen a goat before, it was likely white.

But if you have not seen a white goat before, it’s not too late.

In this article, we compile the profile of some white goat breeds.

We’ll talk about their origins, breeding qualities, lineage, and much more.

Angora is an old goat breed that originated from Asia Minor – majority of which is modern Turkey.

Goats of this breed have a unique appearance with their curly, fibrous, elastic coats.

The coat of an Angora goat serves as the source of mohair fiber – their main product.

While it is typically white, it may also come in other colors, including red, black, and red.

The commonness of the white variant is driven by a demand for it; mohair buyers in the United States, particularly Texas, do not work with colored mohair.

On average, the coat of an Angora goat grows by one inch every month. Then it is sheared in the fall and spring, and at each shearing, a goat can produce 5-10 pounds of mohair.

The weight of Angora goats varies significantly – the bucks are larger than the does by a lot.

Besides their mohair, Angora goats may also be bred for meat. Bucks and does grow a pair of curved horns, and the does produce one kid per birth.

The eponym of the Appenzell Goat breed doubles as its origin; Appenzell goats originated from Appenzell, Switzerland.

They are a breed kept primarily for dairy purposes.

Members of the breed are medium-sized, with the bucks weighing more than does, on average.

An Appenzell doe weighs about 99 pounds when fully grown but the bucks can weigh up to 143 pounds at maturity.

The bucks can grow as tall as 31.5 inches, while the does grow up to 29.5 inches. However, both sexes are hornless, and they typically have plain white coats.

Being dairy goats, the main product they offer is milk. Over their 270-day lactation period, they produce 1500-1700 pounds of milk. Appenzell goat milk contains around 2.7% protein and 2.9% fat.

The Australian Cashmere is a breed that belongs to a group of goats that produce cashmere wool.

Cashmere wool is highlighted by its softness and quality, and it is the main reason Australian Cashmere goats are bred.

On average, Australian Cashmere goats produce 2-4 ounces of cashmere fiber per year. But in some cases, this output may rise to 17 ounces within the same timeframe.

Their weights vary based on the purpose they are bred for; those bred for meat are usually the largest.

Australian Cashmere goats come in coats with solid colors. But of the many possible colors, white is the most favored.

Danish Landrace goats are native to Denmark, as their name suggests.

They are a breed of medium to large-sized goats reared primarily for milk production.

The bucks are typically bigger than the does, and they weigh on average 176 and 127 pounds, respectively.

In winter, they adapt to the cold weather by growing a thick coat. Their coats come in various colors. But it is commonly white, black, or brown.

Danish Landrace may be kept as dairy goats or as pets.

They may also be bred for their meat. The does are excellent at milk production; in a year, they can offer up to 800 liters of milk.

This breed is so named because of a hereditary condition called myotonia congenita. This condition causes the goats’ leg muscles to contract and remain stiff when startled. Consequently, they fall over.

The coat of Fainting goats can contain either short or long hairs. Some may even produce cashmere fiber during the colder months.

Their coats come in various patterns and colors, including white and pied.

Fainting goats are bred for 3 purposes: for meat, as pets, and to bait predators from herds.

Since Fainting goats fall when scared, farmers believe they can serve as bait for predators while non-myotonic animals escape.

The average Fainting goat weighs between 60 and 174 pounds. But the bucks can weigh as much as 200 pounds.

The height range of this breed often falls between 17 and 25 inches.

Finnish Landrace goats originated in Finland. They are a breed of medium-sized goats no less than 4000 years old.

Finnish Landrace goats have coarse, long hair with a dense undercoat. The coats are usually white but could also be black, pied, grey, or saddled.

Both male and female Finnish Landrace goats have beards, and they can be polled or horned.

They are primarily bred for milk production. The average doe will produce 6.5-8.8 pounds of milk per day while lactating.

Girgentana is a goat breed native to the province of Agrigento, in the southern region of the Sicilian Mediterranean Island.

Goats of this breed have white coats with some slight brown coloration around their heads and throats.

Girgentana goats are medium-sized. They have an average buck weight of 143 pounds and height of 33 inches. Conversely, the average doe weighs 101 pounds and is up to 31.5 inches tall.

Girgentana bucks and does have horns and beards. When fully grown, the horns form a whorl.

Girgentana goats are mainly kept for milk production which is understandable since you can get up to 880 pounds of milk from them in a year.

Jonica Goats are from the province of Taranto in southern Italy.

This breed is thought to have been developed from a crossing between local Italian varieties and Maltese goats.

Jonica Goats are medium-sized. The average buck measures 150 pounds while standing 30 inches tall. Does weigh around 105 pounds and measure up to 27.5 inches in height.

Jonica Goats typically have white coats. But sometimes, they could be slightly rose or brown. In most cases, both genders have horns.

Goats of this breed can serve 3 purposes. They can be kept as pets, and they can be bred for slaughter.

But their primary purpose is for milk production. Jonica Does can produce up to 400 liters of milk in a year.

The Russian White Goat is native to Russia.

It was created from selectively crossing Swiss Toggenburg goats and Saanen goats with local goats breeds of the former USSR.

Male Russian White Goats typically weigh 132 to 165 pounds. But the females weigh 110 to 132 pounds, on average. They come with white coats and may be horned or hornless.

Russian White Goats are highly hardy, and they adapt well to various climates.

This breed is primarily kept for dairy, with the does averaging over 1200 pounds of milk per lactation. Milk of Russian White Goats contains 4.2 to 5.3% fat.

Saanen is a popular goat breed that originated in Saanen Valley, Switzerland.

They are primarily a dairy breed, and they are the largest amongst dairy goat breeds. Their large-sized udders, long necks, and small-sized legs are some of their distinct features.

The coats of Saanen goats are made up of small-sized white hairs, and members of the breed generally have no horns. In some cases, their coats can be biscuit-colored.

Saanen goats are excellent milk producers. On average, the Does produce 3.8 liters of milk per day – one of the highest rates among dairy goats.

The milk contains up to 3.5% fat. This makes it useful in the production of various dairy products.

Saanen goats are decent breeders. They breed once a year, and each birth can produce one or two kids.

The Somali goat breed is from east Africa, particularly Somalia, Kenya, and Djibouti.

It is a medium-sized breed reared primarily for meat. While the bucks of this breed can be as heavy as 154 pounds, the does weigh 99-121 pounds.

Somali goats have coats with short hairs. The hairs are usually white, but they may sometimes be spotted.

Although Somali goats are kept mainly for meat, they could also be used for milk production.

On average, the does produce 2.2 to 6.6 pounds of milk daily, even when there is limited access to water. 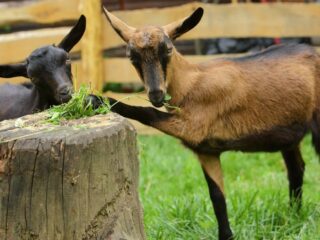 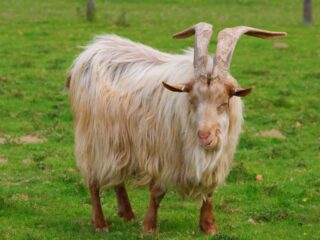