Goats make excellent additions to many farms but you may be wondering which ones are long-haired. While short hair goats seem to be the most popular on most farms in America, there are a large number of long-haired goats that still exist today.

Long-haired goats are not only gorgeous to look at, they also tend to do well in cold climates and often their hair is actually a usable commodity.

The wool or hair on many goats with long coats can be used as fiber to make your own clothes if you know how to, or it can be sold or even traded to other farmers.

The Pygora goat breed originated when breeders crossbred the Angora goat with a Pygmy goat.

The result was a shorter goat that had soft, gorgeous fleece. Their hair looks thick and appears short, but it is in curls that can stretch up to 6 inches long in some of these goats!

A Pygora goat’s wool coat can range from being super soft like cashmere or a little coarser like mohair. These goats are commonly bred for their fiber and can weigh upwards of 75 to 95 pounds as adults.

The Bilberry goat breed originated in Ireland and unfortunately today sits on the brink of extinction. It is a unique breed in that it exists predominately in a single herd, albeit a rather small one today.

They are cream to tan in color and have beautiful, long, shaggy coats of hair. They also have very long horns that curved backwards towards their backs, a characteristic that makes them easy to identify.

The Bagot breed of goats hails from England and existed in an almost wild state for many years. They are considered an endangered goat breed, so do not expect to see them on your local farm.

They are small-sized goats that sport horns and predominantly white-colored wool. Their coat is not super long, but it is much longer than that of a short-haired goat.

Their hair tends to be cashmere-like, but they do not really produce enough to be profitable.

Messinese goats are unlike any you might see on most goat farms in the United States. The breed originated in Italy and was first recognized as an official breed in 2001. It is used primarily for milk production.

These goats can come in a variety of colors ranging from dark to light, and their hair is simply breathtakingly beautiful. Messinese goats have coats of hair that is long, rather straight, and protects the animals from the elements.

The Orobica goat breed, also called the Valgerola, was established in Italy. Orobica goats are medium-sized goats that have coats of long, gorgeous fine hair. Their colors can vary from cream to brown to an almost violet shade, depending on the light.

Danish Landrace goats originated in Denmark and are used mainly for milk production. Their coats grow longer in the winter than during warmer months, so they are considered to be long-haired goats.

They can be brown, black, white, gray, or a number of other shades and hues.

This medium to large-sized goat  tends to be calm, friendly, and ideal for farms. They faced population decreases over the years, but they are making a solid comeback.

Not to be confused with the previous breed of a similar name, the Dutch Landrace is a goat breed all of its own.

These goats usually have extremely long coats of hair that comes in a variety of colors including black, brown, white, grey, blue, and more.

This goat breed comes out of the Netherlands and they tend to be rather stocky goats that range in weight from around 130 to 166 pounds.

Today, most Dutch Landrace goats are cross-bred in an effort to keep the breed from extinction.

The Australian Cashmere goat breed produces goats that are notably hardy and able to withstand the harsh climates in Australia and around the world. They are typically white-colored, large-sized goats that do well in rough environments.

When the weather outside gets colder, these goats grow extremely soft coats of long fleece that feels like cashmere. Cashmere fleece is very unique and very desire by producers.

The Changthangi goat, also called the Chagra goat, is another cashmere goat breed. This one hails from the country of India. It is thought that the colder climate of the area lead to their growth of this unique wool.

They are small goats that range in size from 44 to 47 pounds at adulthood.

Changthangi goats are usually either black, brown, gray, or white in color. Their long, thick cashmere wool is referred to as Kashmir Pashmina wool. The soft fiber is used to create shawls, scarves, and more.

The Golden Guernsey goat breed originated in the United Kingdom. These goats are typically golden brown to red in color. Not all the goats in this breed produce coats that consist of long hair, but many of them do grow rather long hair.

This goat breed is considered very friendly and is used most often to produce milk. They usually do not have horns, but some do.

Finnish Landrace goats were first produced in Finland, hence their name. They are typically white, gray, or piebald in color. They grow thick coats of long hair that is breathtakingly gorgeous.

They are used primarily for milk production, but some farm owners could harvest their wool coats for their fibers. These goats do well in the winter, since they have thick wool coats to keep them warm.

The Angora goat is probably the easiest goat to confuse with a sheep.

This breed produces thick wool coats of long, tight curly hair. They were first brough to America in 1849 and today they live mostly in the southwestern part of the country.

Their harvested wool is called mohair and it is used in yarns to produce fabrics. Although they look a lot like sheep, they are not sheep but they do need their coats sheered around two times each year.

They may require a little more work, but these are probably the cutest and most unique-looking goats I have ever seen.

Pyrenean goats originated in the South Pyrenees which explains their name. They have coats that produce noticeably long hair.

Their coats can be a combination of brown, black, tan, chestnut, and gray colors. Pyrean goats are used primarily for dairy purposes, but sometimes for their meat.

Hexi Cashmere goats are found mostly in China. They produce thick coats of cashmere wool. Most of these goats are white in color, although some can be other colors.

They seem to prefer desert-like areas and not much is known about these goats since they do not seem to be found in places other than specific regions of China.

The Valais Blackneck goat breed was first discovered in Switzerland and Italy. They have a number of alternative names, most of which are harder to spell than their most notable one.

These goats have modestly long hair, although it does not seem to be as thick as other long-haired goats.

The Stiefelgeiss goat breed hails from Switzerland and almost became extinct in the 1980s. They are still found primarily in Switzerland. The goats produce moderately long hair and tend to be multi-colored in shades of brown, red, black, and gray.

The Girgentana goats originated in Italy and are used mainly to produce milk. They are medium-sized goats that produce long coats of white or gray hair.

Girgentana goats have unique-looking horns that twist like spirals at the ends. They are considered to be endangered and in 2013 only 390 Girgentana goats were registered.

Bionda dell’Adamello goats are undeniably gorgeous. They grow lovely coats of long hair that ranges in color from a light gold to a darker brown. These goats typically weigh between 99 and 165 pounds at adulthood.

The Asmari goat breed comes from Afghanistan. These goats are able to grow coats of thick, luscious cashmere wool.  They are classified as a large-sized goat breed.

Asmari goats are used not only for their milk and meat, but also for their fiber and their backs. Many farmers use these goats as pack animals since they came range in size from 100 to 200 pounds.

Goats with long hair are really no different than short-haired goats, but now you know that there are a lot of options out there.

While we may only see goats with short hair, the truth is, long-haired goats are better equipped for the winter and they are often super soft to pet!

There is a lot of information on the internet about long-haired goats and all the different breeds that produce them. Here are the sources that were used when writing this article. 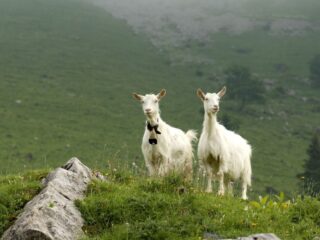