Why Your Ducks Are Attacking Your Chickens and What to Do

Most times, when ducks and chickens live together, they ignore one another. But sometimes, the ducks may attack the chickens. For this reason, some people have mixed opinions about whether they should keep ducks and chickens together.

Why do ducks attack chickens?

Even though chickens are usually more aggressive, ducks sometimes attack them. In some cases, they attack for trivial reasons. Other times, ducks might attack chickens when their living conditions are uncomfortable or when the chickens are new to the flock.

If you are not sure why your ducks are attacking the chickens, and you do not know what to do to stop the attacks, we have just the answers you need. Also, if you are having a hard time understanding duck behavior, this article will be useful to you.

5 Reasons Ducks May Fight With Chickens

Fighting is rare between female ducks and hens. But with roosters and drakes, the story is different.  Most times, farmers avoid keeping them together in the coop to prevent fighting.

Ducks and chickens fight for many reasons, and some of these reasons include:

Overcrowding makes the birds irritable and causes bullying. If there is inadequate space and feed, a fight may likely start amongst the birds.

You should design the coop in a way that allows the birds to eat simultaneously. Using multiple open feeders works best so that all of the birds can eat when they want to.

Ducks Fight the Chickens to Have the Females to Themselves

Raising chickens and ducks without enough females of either species will cause fights that can lead to death. An excellent breeding system should have a proper male-to-female ratio.

You should not have more males than females. You should also not have an equal ratio of males to females. There should always be more females than males, for both chickens and ducks.

With this in place, the male folks would be busy with their female folks, and they all can live in harmony.

Extreme bright light for long periods causes birds to become hostile to one another. Excessive exposure to bright light can be stressful to the birds, and it can make them irritable.

If light is required to keep the birds warm, use red or infrared light for not more than 16 hours per day.

Birds spend a large part of their day searching for food. When the environment is not favorable enough for this purpose, they may become aggressive.

You must provide your birds with adequate food that suits the age and the breed you are raising. The diet should be rich in protein, sodium, and phosphorous. Deficiencies in these nutrients can also cause aggressiveness.

Birds get uncomfortable when exposed to high temperatures, and sometimes, the discomfort can make them aggressive.

Ducks fancy clean, cool water. So, as a way to make them comfortable when it is hot, provide cool water for them.

Also, ensure their coop is properly ventilated, so it does not get overheated..

Abrupt changes in the environment can stress the birds and lead to aggression. When you want to change the location of the birds, you should move them with their feeders and waterers. It helps them to adapt quickly to the new environment.

Yes, ducks and chickens are birds, but introducing them together for the first time can cause aggression.

Young chickens and ducks will cope better with this new introduction. But the older ones that have not been reared with other birds often get upset.

5 Tips to Prevent Fighting Between Birds

Do Ducks Fight to the Death?

Male ducks can be tough to handle sometimes, especially during mating season. The hormonal surges they experience during this period make them more territorial and aggressive.

Drakes mate a lot during mating season, and sometimes, female ducks get killed due to excessive mating.

Sometimes, male ducks fight and kill their offspring to have enough time with the female ducks. Male ducks will also fight just to show who is alpha within the flock.

Will a Duck Kill a Chicken?

Ducks may look sweet and innocent, but they are capable of killing a chicken. Due to their anatomical differences, a duck can kill or injure hens when trying to mate.

Drakes have corkscrew penises, and hens are not built to mate with such a type of reproductive organ. So, when a drake mates with a hen, it could cause internal injuries or kill them.

Can Chickens and Ducks Live Together?

Although chickens and ducks have their lifestyle differences, it is not impossible to keep them together. With the right knowledge and planning, things should turn out fine.

However, keeping ducks and chickens together will require some changes in their feeding and coop design.

Some of these changes are as follows:

Chickens and ducks eat the same feed. They both love mealworms, veggies, and bread. But the young of both species require different nutrients and medications, so you shouldn’t mix the food of the young ones.

Poultry layers need a very high amount of calcium in their food. Calcium is necessary for egg production, but it is not as essential for the ducks.

Young ducklings need extra niacin in their feed. But once they are fully grown, you may bother less about that.

Also, separate the brooders and the ducks’ water sources. Ducks love to splash water everywhere when they are bathing and eating, which could get the chickens soaked. Wet chickens are more prone to illness, especially in cooler weather.

Ducks and chickens have a distinct taste for housing. While the chickens would prefer to roost higher off the ground, ducks prefer to nest on the floor.

To accommodate both in the same place, you can separate the coop into the wet and dry sides. The ducks will have the wet side while the chickens stay on the dry side.

Ducks attack chickens when they are uncomfortable or when their living needs are not met. Although this does not happen every time, you should be watchful because the fights can be quite violent. Also, if you notice any aggressive behavior in your birds without an obvious cause, isolate the offender and consult your veterinarian. 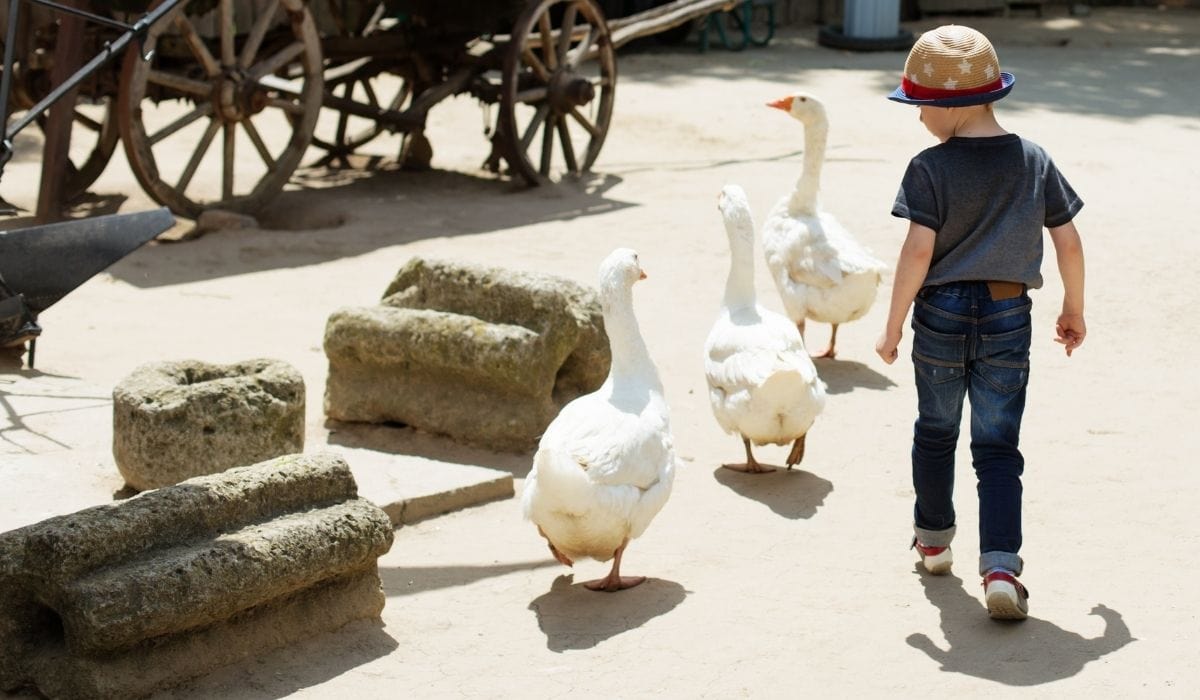 Reasons for Ducks to Shake, Both Good and Bad
Read Next Post →
Click here to cancel reply.