If you are not a matador, you probably don’t want to get a cow angry. Even matadors sometimes regret getting cows angry. Narrowly avoiding an attack from a cow, bull or steer isn’t a normal persons idea of fun.

But why do cows get angry? What makes them aggressive?

Aggression in cows and bulls is influenced by internal and external factors. Some of them are genetically inclined to be aggressive. While others become aggressive due to fear, mishandling, and other similar factors.

In this article, we shall discuss aggression in bulls and cows, the types, and how to avoid a cow attack. Of course, reading this won’t make you a matador, but it should help you be safer around cattle.

Aggression in Cattle (Steers and Cows)

Aggression in cattle is usually connected to fear, hormones, poor handling, poor training, and inadequate enrichment. It could also be due to the genetic makeup of such steers or cows.

If the cattle are not handled or trained properly, they learn to become aggressive after repeated exposure to fearful situations.

Fights between bulls can be longer than those between steers, sometimes lasting hours at a time. They might even rest in between and pick up from where they left off.

Even while resting, the bulls will try to keep each other from moving. Having horns makes aggression between cattle more dangerous. With their horns, they could hit each other gently, or they could do worse.

For polled cattle (cattle without horns), they ram into each other with their bare heads. When they are being aggressive to people, cows and steers will either kick, ram, bunt, or crush the human in their path.

Kicking is a common problem with beef cattle. This may be because they are not bred to be gentle. They are raised by their moms, and unlike dairy cattle, they are monitored and handled minimally.

It is highly likely that while trying to examine a beef cattle in a confined space (like a pen or a cage), they will kick you. So, you should probably let a veterinarian handle that.

Most cattle, especially beef cattle, have any routine care performed in specially designed squeeze chutes which temporarily immobilize the cows keeping them, and the handlers safe.

Routine handling will help most cows become more friendly. This is especially true when the cause of aggression is fear-based.

Aggression in bulls is a bit unpredictable. Any cow can be aggressive, but bulls are more likely to display this aggression. There are differences too among different breeds.

Dairy bulls are known to be particularly aggressive. The thought process is that hand-rearing may contribute to their aggressiveness. The lack of socialization that comes with rearing them as such may be the reason for their behavior.

Beef bulls are typically less aggressive. Because they are raised by their mothers in a herd environment, they are much more socialized.

In some situations, one bull may try to mount another bull, and this may spark an aggressive reaction. The consequence of this action is 2 bulls fighting each other.

Fights between bulls usually lead to injuries, but can also be fatal. Fatality is more likely when the bulls have horns.

While its true that many cattle producers select for traits like milk production, fertility and meat production, temperament is an important trait as well.

If you have an aggressive bull, you may want to cull it. Having one among other bulls can be a recipe for disaster.

Just like people, cows can get angry for any of a variety of reasons. Here are the top six reasons cows are aggressive.

Cows may react aggressively to each other when there is a source of stress present. Generally, these sources are things or situations the cattle are not used to. It could be a new handler, a new face, a new type of food, or restraint.

This type of aggression is common with dairy cattle because of the way they are reared. But it can also be seen in beef cattle, especially when you add new mates to their group.

Besides making them aggressive, these stressors can also affect their growth and reproduction. You should take note of how the introduction of situations and strange items affects them.

Reacting aggressively to pain is a trait not only seen in humans but in animals too. Cattle are not exempt from this trait.

Administering an anesthetic before a procedure can help prevent pain for the cattle.

While the pain caused by lameness can make cows aggressive, it may also make them nonviolent. They would rather spend more time laying on the ground instead of being aggressive.

If your cows are not comfortable, they could become aggressive. One such cause of discomfort to cattle is a cramped resting space.

With a cramped space, the cows won’t be able to lay down properly, and this will reduce their laying time. While humans will express sleeplessness by being cranky, cattle will express it by being irritable and aggressive.

Besides laying in a cramped space, elevated temperatures can be uncomfortable for cows. This may influence their behavior and cause them to act aggressively too.

Stress and discomfort affect the hormones of the hypothalamic-pituitary-adrenal (HPA) axis.

Many studies have shown that changes in the level of hormones produced in the HPA axis can influence aggressive behaviors.

High levels of hormones like cortisol and the adrenocorticotrophic hormone (ACTH) can trigger aggressive behaviors in cows.

On the other hand, high levels of oxytocin and arginine-vasopressin have been associated with decreased aggressive behavior.

When cows have offspring, they can become more aggressive. Besides the usual maternal instinct of attentiveness, caring, and bonding, mother cows can be aggressive to protect their calves.

Cattle are a prey species, so it only natural the mothers try to protect their calves from potential danger. This behavior is common when they are lactating. During this period, their fear response is suppressed, and they are more defensive.

You could say a hungry cow is an angry cow. If your cows are not getting enough to eat, they could become aggressive.

Aggressive behavior between cattle may also be seen when there is not enough feed to go around.

With the high-density of cattle in one space, there is increased competition for water and feed. This may cause the cows to be aggressive towards each other as they fight their way to get something to eat.

I’m pretty sure that if you are reading this article, your goal in life is not to become a matador. Nobody wants to be a victim of a cow attack. It could be very painful, dangerous, and deadly. 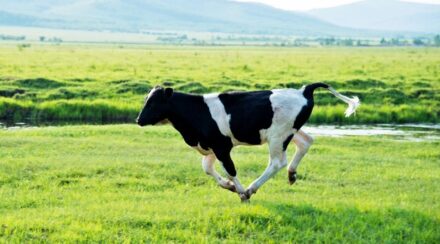 Do You Run Faster Than a Cow? 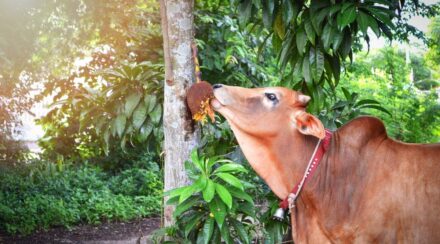 What Fruits Can Cows Eat?