If there’s one adjective that suits birds perfectly, it’s beautiful. From peacocks and swans, to macaws, flamingoes, and ducks, many avian breeds are quite pleasing to the eyes.

You’ve probably seen one or two ducks in your life – and yes, maybe you thought some of them were beautiful.

But have you ever considered all the beauty that different breeds of ducks have to offer? Here are eight of the most beautiful ducks.

The Mandarin Duck originated from East Asia. Ducks of this breed are usually found in freshwater and wetlands. You’ll also find them in lakes, ponds, parks, and around trees.

The male Mandarin Duck is a sight to behold. He has multicolored plumage featuring orange cheeks, pale-orange sides, and orange sails with blue stripes on his back.

He has a red bill with white tip, and his head is colored white, pale orange, and blue.

The females’ plumage is not as ornate as the males’. They have grey heads, white eye strips, brown feathers on their back, and grey bills.

Mandarin Ducks usually move alone or in pairs, but when winter comes, you may see a large flock moving around.

Although they are waterfowls, you’ll find that they make their nests inside trees. On average, Mandarin Ducks live for about 6 years.

The King Eider is a large duck commonly found around seas and oceans. They usually nest in arctic tundra – close to lakes and ocean coasts around summer.

But in fall or winter, they move toward areas around the southern edge of sea ice or polynyas.

Like the Mandarin Ducks, the male King Eider is the more ornate one. He has a black-and-white body, white breast area, and orange bill. His oblong head is colored orange, green, and pale blue.

The plumage of a female King Eider is brown with black mottles, and their bill is black. They usually reside in the tundra landscape near water, a rock, or a ridge, and they attend to the nest alone.

Female King Eiders have a clutch size of 2-7 olive-buff – olive eggs that they cover with low vegetation. The incubation period is 22-24 days, and they do not feed much during this time.

They fly quite well, swim excellently, and are great divers. While on the sea, they mainly feed on shellfish, small fishes, algae, and crustaceans. On land, they feed on plants and insects.

One of the most distinctive features of the Northern Shoveler is its spoon-shaped bill. This waterfowl can be found in North America, Europe, Africa, northern South America, India, and Southeast Asia.

Northern Shovelers are known to breed in the shallow wetlands of northern Europe, North America, and across the Palearctic. When winter comes, they move toward southern Europe, Southeast Asia, Africa, and the northern regions of South America.

In the case of Northern Shovelers, both the males and the females are well-adorned. The male has a green head, yellow eyes, long black bill, red plumage on his side, black on his back, and white on his chest.

The female has brown plumage, long orange bill, orange legs, and a blue shoulder patch that can be seen when she is at rest.

Shovelers eat tiny aquatic invertebrates and seeds. They feed with uniquely shaped bills that contain lamellae (about 110 of them).

The lamellae are fine projections that help them sift out crustaceans, seeds, and other small aquatic invertebrates from water.

They create their nest on the ground in areas with short vegetation. They lay 8-12 eggs per nesting, and the eggs have an incubation period of 22-25 days.

The Spectacled Eider might not be the most well-known, but it certainly is beautiful. They stay around oceans and tundra in areas difficult for humans to travel to, and this may contribute to their relative obscurity.

When it’s time to breed, they go to tundra with ponds and lakes. At times when they are not breeding, they move toward ocean coasts.

Spectacled Eiders spend most of the year foraging by swimming and diving underwater. During summer, when they move to the tundra, they forage by dabbling in the waters.

Most times, when they are at sea, they eat mollusks. When they move to the tundra during summer, they feed on berries, grasses, aquatic insects, crustaceans, and other things.

The male Spectacled Eider is well-decorated with an orange bill, olive-green head, white patch around his eyes, and black-and-white plumage. The female, on the other hand, has brown plumage with a black bill.

Spectacled Eiders build their nests around tundra ponds. They create a shallow space and line it with down and plant materials. Spectacled Eiders lay between 3-8 eggs per nesting with an incubation period of 24 days.

The mother tends to the nest alone, and the ducklings usually leave the nest shortly after their birth to go fend for themselves. Spectacled Eider ducklings grow quite fast; you should expect them to start flying after 53 days or less.

The Mallard breed is one of the most important duck breeds. They can be found in different locations across the world, temperate or subtropical.

Both male and female mallards are beautiful, but the male is more colorful. He has grey flanks, a green head, a yellow bill, and a black tail curl.

The female, on the other hand, has grey plumage with a grey bill. When both genders are in flight, a blue strip of feathers is revealed in their underwings.

Mallards are divers that feed on both plant and animal matter. However, when they are migrating, they tend toward eating more plant matter. When they are breeding, their diet predominantly contains animal matter.

Mallards nest on dry land around water bodies. The ducks create shallow bowls in the ground, line them with leaves, grasses, or twigs. Then they lay their eggs in it.

In one nesting, female mallards can lay anywhere between 1 and 13 eggs. The eggs are incubated for 23-30 days before they hatch, and they leave the nest about 13-16 hours after birth.

You should notice that stiff long tail when you see a White-Headed Duck. Ducks of this breed spend most of their time on water.

They breed in regions such as northern Africa, western Asia, central Asia, and Spain.

White-headed ducks are a threatened species as they currently have a population of around 10,000. This shortfall in their population is mainly facilitated by hybridization with the North American Ruddy ducks.

Another factor that plays a part in the reduced population of White-headed ducks is the loss of wetlands.

This species prefers to stay around freshwater, especially those with dense vegetation. The vegetation serves as a resource for nesting and taking cover.

On average, female White-headed ducks lay 3-5 large white eggs per nesting, and the eggs are incubated for around 25 days.

White-headed ducks are not habitual fliers, and they are usually not noisy. Outside breeding season, both males and females have similar brown plumage with white streaks on their cheeks.

When breeding season comes, the white areas on the heads of the drakes become larger. Then the base of the bills becomes swollen and bright blue.

The male has a black cap and neck. The female has a dark-brown cap and black bill.

The ducks of this breed are not as colorful as other breeds, but they are still beautiful.

Surf Scoters are medium-sized ducks widespread across Pacific and Atlantic coastlines. They nest in the taiga shield ecozone across Alaska and northern Canada.

Surf Scoters nest on the ground around wetland areas, usually a lake. These nests are usually laid beneath rocky ledges, fallen trees, or tree branches, where they are well-concealed.

The male Surf Scoter has black plumage with a white patch on the dorsal part of his neck. His bill is sloping and colored orange with some red and white areas.

The female Surf Scoter has dark-brown plumage with a sloping black bill. Her face carries two white patches located around her eyes.

The male Smew makes monochrome look good. He has white plumage with some white stripes on his back and face and a white bushy crest.

The female has grey plumage with a reddish-brown crest and a huge white patch on her throat and cheeks.

Both the male and female Smew has a delicate dark-grey bill. While in flight, they reveal their black-and-white wings.

Smews are small diving ducks commonly found around rivers, reservoirs, and lakes. They breed in trees in the northern taiga of the Palearctic and Europe.

Smews are migratory, and when winter comes, they move to places like the Netherlands, northern Germany, the UK, the Black Sea, and the Baltic Sea.

They thrive around slow water bodies with a good supply of fish, insect larvae, and aquatic insects.

Smews make their nest around lakes, usually beneath small trees. They lay about 7-13 eggs per nesting and incubate them for 26-28 days. 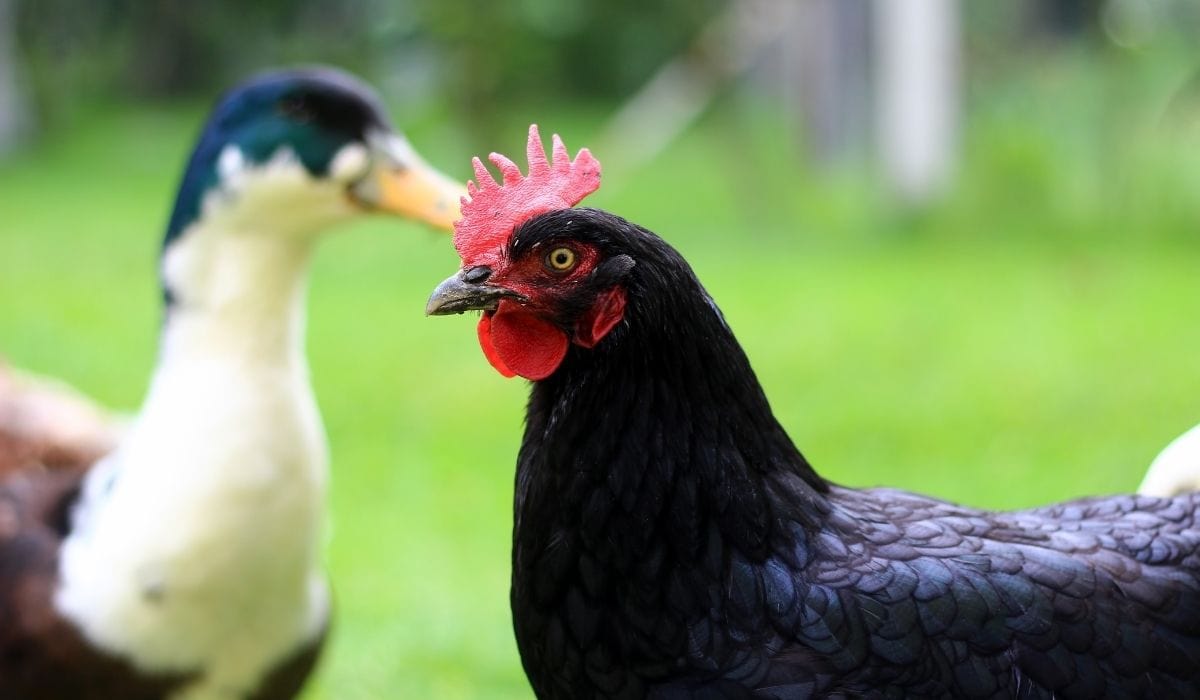 Is it Easier to Raise Chickens or Ducks?
← Read Last Post