Ducks, along with almost half of all waterfowl, form seasonal bonds with one another in order to breed and produce offspring. If you have ducks on your farm or you come across them often in nature, a common question you may have is how exactly do they mate?

Unlike 97% of birds, male ducks have a phallus, or penis, while the females have a vaginal canal that accommodates the male’s phallus. (source) This pairing allows for the fertilization of the female’s eggs. There are also several twists and turns that makes this mating ritual far more complex than it seems.

Ducks are one of an extremely small percentage of birds that still have phalluses or vaginal tracts depending on their gender. Besides ducks, the group also includes geese and swans as well as ostriches and emus.

Not only are ducks unique in the bird world, the odd design of their reproductive organs has more than a few people scratching their heads.

Do ducks mate for life?

Unlike geese, ducks do not mate with one another for life. Instead, ducks are seasonal monogamists. In the wild, this means that a female duck will select a male mate for the duration of the breeding season.

He will defend her from other males, but he will not help raise the resulting ducklings like male geese often do. The following year, new bonds will be made with different ducks. (source)

Domesticated ducks follow different rules based on availability. One male will instinctively breed a small flock of ducks year after year if that is their only option.

How exactly do ducks mate?

Male ducks will often attempt to court and woo a female duck to form a bond and make her more receptive to the mating ritual. Unfortunately, sometimes eager and competitive males will just attempt to breed whether the female wants to or not.

The male will steady himself by mounting the female from behind and grabbing her neck with his bill. A receptive female will relax and lift her tail feathers to allow for breeding.

Male ducks, also known as drakes, have a phallus that delivers sperm to the female’s vaginal canal and if successful, it will result in fertilized eggs over the next few weeks. (source)

How do ducks select their seasonal mate?

There are more male ducks in the wild than there are females, therefore the females essentially get to decide which mate they chose to bond with for the season.

The males decide which females they want to impress, but the final decision is left to the female. Typically, a female will select the male duck that appears to be the healthiest and most capable of survival.

They also desire a strong male to defend them against all the single male ducks that are still roaming in search of a mate. (source)

Domesticated ducks will also choose their mate if more than one male duck lives in their enclosure or on the property. The same rules typically apply, although the male will probably be bonding with more than one female duck.

How is the mating process selective?

Therefore, female ducks have to be more relaxed with the male ducks they want to breed with, to provide easier entry and a welcome environment for successful reproduction.

There are also false pockets within the female’s vaginal canal that misdirect unwanted male ducks and essentially prevent fertilization.

This means that if the interaction is not wanted or the male is too eager, he will think he has completed the task, but his sperm will likely not reach a single egg! (source)

At what age can ducks start mating?

Technically, ducks can begin mating with one another when they reach 4 months old but sometimes it takes longer depending on the breed and the specific duck.

Once a female duck begins laying eggs, she can begin successfully mating with a male duck.

What is a good number of male ducks to female for fertility?

For backyard farms, the right male-to-female ratio of ducks to have depends on the breed of the duck. For larger breeds like Muscovy and Pekin, you should keep a 1 male to no more than 5 females.

Smaller breeds like the Indian Runner, Khaki Campbell, and Mallard ducks can be successful with a larger ratio, around 1 male to every 10 female ducks you own.

The dangers of too many males to females

Sticking to the right ratio of males to females on your farm is not only important for the fertility of your flock, but also for the safety of your females. The mating process can be violent, and females receive the brunt of any injuries that occur.

If there are a limited number of males on your farm, then the females should be fine. If you keep too many males that have access to all the females, the ladies can be mated multiple times by multiple male ducks, which has been known to be fatal in some circumstances. (source)

Do you need a male duck for the female to produce eggs?

No! Females will produce eggs even if there is no male around. A male duck’s contribution only fertilizes eggs, it does not create them. The eggs produced without a male to fertilize them will not grow into a duckling, but they can be harvested and safely eaten by humans.

How long can the female duck store sperm after mating?

Female ducks can store sperm for at least two weeks and sometimes even longer depending on the duck and its breed. This allows multiple eggs to be fertilized by a single mating session.

This is also good news if a male duck dies or is removed shortly after mating because the eggs will continue to be fertilized for the next few weeks.

Can more than one male duck fertilize a batch of eggs?

While there are certain firewalls that allow a female duck to prevent unwanted breeding, sometimes more than one male duck can be successful at mating with a single female.

Typically, a bonded duck pair will stay together long enough for the male to stop other males from breeding with his mate.

If the male is unable to defend his lady, then more than one male duck can sire different ducklings within a single brood.

This is especially true in a backyard farm, where one duck may be responsible for more than 5 females. They cannot adequately stop all their females from being bred by a competing male duck. (source)

Do ducks mate in water or on land?

Ducks prefer to mate in the water, it is more natural, and they are categorized as waterfowl for a reason! Nonetheless, ducks will mate on land if that is where the female is when they decide to copulate.

Can a male duck drown a female duck during the mating process?

While it is very rare, a male duck can drown a female duck when mating, especially if there are multiple male ducks repeatedly breeding the same female duck.

Female ducks are usually not capable of fighting off unwelcome suitors and if too many unbonded males are around, things can get dangerous.

In the water, the male pushes the female’s head underwater during the mating act. If this happens over and over or if it just takes too long, a female could drown.

You may know far more than you ever wanted to know about ducks and their mating practices, but now you understand that ducks are far more unique and intriguing than you ever imagined.

To combat the competitive and often violent actions of male ducks, females have developed a way to prevent unwanted fertilization. How utterly amazing is that? 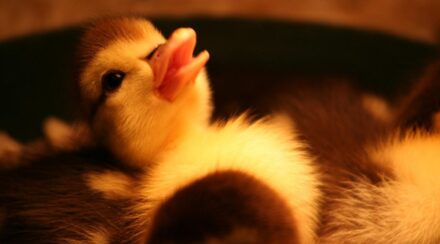 Tips for Raising Ducklings Without a Heat Lamp 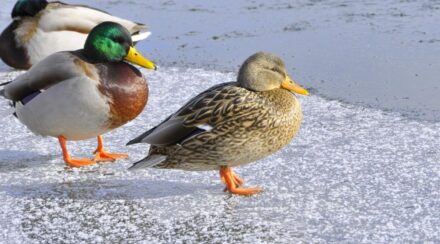 What Temperature is Too Cold for Ducks?