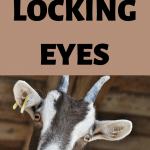 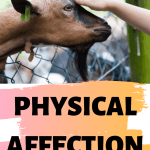 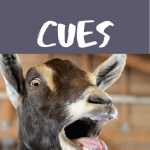 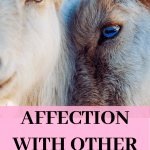 Move over dogs, there’s a new rising star in the companion pet world: goats! While, yes, they are traditionally barnyard livestock, that doesn’t mean they aren’t also adorable little lovebugs. In fact, goats are more and more being compared to dogs in terms of how well they bond with their humans.

It makes sense, too – canines and people developed an affectionate relationship because of thousands of years of domestication, and now goats have been increasingly treated in the same way. They’ve now spent a good chunk of time being domesticated by humans, with us taking them evermore into our fold.

And it’s not just a gut feeling, this animal’s affection: goats actually do show their affection. While they can’t voice an “I love you!” like people, they use body language, eye contact, interaction initiation and more to make it known they feel loved and they love you back.

Goats can be affectionate towards humans. Scientists have proven they show affection a variety of different ways including:

You know how sometimes your dog will just straight up stare at you? Goats do that too! Scientists refer to it as “audience-dependent human-directed visual orientation behavior” (a mouthful!) but it essentially boils down to two things: goats either looking at you to influence behavior, such as wanting a treat, or simply to take you in because they love you. (source)

They also may stare to communicate a need for help. If there is something they can’t figure out or if they are uncomfortable, they may stare at you and use subtle body cues to ask for assistance.

That very act of asking is a sign of affection, as it means the goat trusts you – and also feels confident that there is a strong enough two-way bond to make you want to help them. Teamwork makes the dream work, but it is especially prevalent among buddies.

Goats (like dogs) can’t get up and wrap you in a hug, so they hug you with their eyes. Being stared down by a goat is actually a sign of warmth and caring.

It’s a pretty cute fact that goats actively like to be pet. However, they don’t want you to pet them like a dog: instead of straight petting them down the back, goats prefer to have their front chest and underarms scratched.

Once sure you are a friend, a goat will not be shy about asking to be pet. They’ll come right up to you, stand beside you, sometimes even rub against you, rather like a cat.

You may also notice the mob mentality – in a good way. If one of your goats who approaches you is rewarded with pets, you can expect the others to take note and swarm you in the cutest way.

This act of asking for pets and receiving the pets is a goat’s way of bonding with you. Just like one of the human love languages is physical touch, so, too, does that physical connection matter to goats!

Outside of a goat’s outward signs of affection, it’s actually proven by science that goats harbor caring feelings for people. (source) Through years of research, they found more similarities with a goat’s mind and a dog’s, rather than a sheep.

Since goats were proven to be more individualistic thinking, it was natural they leaned into their domestication and learned to form a bond with people.

Goats, unlike sheep, are happy to live solo with humans rather than in a flock.

That in and of itself is a sign of affection: that a goat will happily choose to spend time with a human than with other goats or other livestock. (Yet another human love language: quality time.)

Animals that were originally bred for agricultural work have increasingly trodden the path of household pets when it comes to bonding.

A social nature is thought by scientists to be a prerequisite for any species to interact with another species than their own. (source) And that makes sense – in order for goats (or any animals) to buddy up with us, they have to actually want to from the get-go.

Affection and happiness are intrinsically tied together. One way you can tell if a goat is happy is if their ears are pricked up. And, it turns out, those ears often point forward when they see their favorite human! (source)

Goats who may have neutral positioned ears when simply hanging out in a field perk their ears up when they see their favorite human coming towards them. That’s a sign of excitement at seeing them – excitement that is felt because of strong affection.

For all a goat’s bleats and cries, it may seem, at first, hard to differentiate what they mean. But when a goat sees their person, they tend to let out a stable bleat of joy.

While other calls may vary up and down in pitch, a steady, stable bleat is a positive sign and a sign of happiness. (source)

Similarly to how a human’s voice may waver when they are uncomfortable around a group or a person, so will a goat’s. Listen carefully for consistent pitch and you’ll be able to pick up on these vocal hints of affection.

A chilled-out, relaxed, stress-free goat is a goat that is happy with you. Signs of aggression, such as head butting, biting, charging, etc. naturally do not convey affection.

But a goat who willingly goes along with its human and remains calm and willing to listen is saying that they like and respect their owner.

This is a trait that makes them excellent family animals, too, as they will be calm and even-tempered around children, too, provided they do not feel threatened.

Affection With Other Goats

It’s not just people goats show their love to, though – it can be other goats! In fact, because they are so naturally social, it is often suggested that you get goats in pairs, so they do not get lonely. (source)

When in little herds of two or more, goats display friendliness to each other in a few ways. For one, they will often huddle up and cuddle together. They also make a point to do most daily activities, such as eating meals and even sleeping at night or naptime, with each other rather than on their own.

Happy goat friends communicate more nonverbally, too. If you see two or more goats together, chilling away in silence, that’s a good thing. Goats who are stressed or unhappy with their companionship are more likely to vocalize that displeasure. Content goats have nothing to yell about.

That being said, goats who like each other may still display common pecking order mentalities. Since they are still herd animals, those rules of coexistence apply and there should be a hierarchy.

Goats may head butt or ram each other to establish dominance and herd order, but it’s not personal between them. Once proper order has been set up, they will settle into being calm friends.

They also have affection for other animals, and make excellent companions for horses, ponies, donkeys or mules. They provide companionship for the larger animal and will act as contented to be friends with a member of another species as they are among goat-exclusive circles.

Goats are super social creatures, curious by nature and domesticated into having an affectionate personality. This quality of companionship and love makes them stand out as something special among domesticated livestock. Once you learn to “speak” the language of goat, you can see how they demonstrate their love and affection in so many ways.

I have 2 Nigerian Dwarf goats. One is so attached, he cries loudly when Im out of sight. He also wags his tail whenever he sees me, and I cannot sot anywhere without him laying on my lap and chewing his cud. The othe one will come up, sniff and chew and let me scratch his side, but he doesn't seem to comfortable with close contact, and will turn away if I reach for his head.

I have a Nigerian buck who will hug me when o ask him if i can get a hug!! I dont know if anyone else who has a goat that will do this. He is thee most friends goat ive ever owned and hes a human lady killer in the good way. Super cute with a great personality.

I have a week and a half old pygmy goat and shell run up to me and paw at me as a dog would or shell try to jump up on e while I'm standing I'm not sure what that means.

@rose, my sheep do that all the time. Goats and sheep are so similar in body and mental features. She is excited to see you. My wether (fixed male sheep) runs up to me all the time and paws at me because he wants me to give him attention instead of the others. He is quite jealous

It could be a variety of things including pests (like flies or gnats), he could be displaying a threat, it really depends what the situation is, his environment, etc.

My goats must really love me then lol! I call them Velcro goats because they are always stuck to me! Plus, they listen to me better than any of my dogs ever have!

How do you train a goat ( we have 2 kid pigmy goats 11 weeks old) to come to us and be petted, only have themthe 4 days, sitting quietly with them with my children, they haven't come up to us fully for treats yet, any advice ?, how do whats best way to initiate contact to show them affection or to train them.