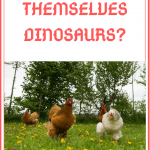 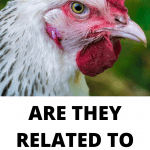 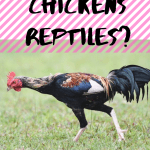 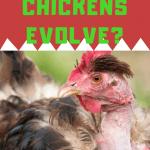 When you think of dinosaurs, the most common image conjured is perhaps that T. Rex from Jurassic Park or some gentle giant brontosaurus, using its towering neck to nibble leaves from trees.

Chickens, like all birds, are descendants of dinosaurs and are, in fact, their closest living relatives! So while they are not technically dinosaurs themselves, they are the next best thing and share ancestral paths and DNA with those might reptiles of ages past.

Are Chickens Themselves Dinosaurs?

Chickens are, by all accounts, birds. They are fowl, whereas dinosaurs were reptiles (here there are some different schools of thought, too, but more on that later.)

As the closest living descendants of dinosaurs, chickens have been called the “modern dinosaur,” but the fact remains that there were some evolutionary breaks.

Chickens are the closest thing we have today to dinosaurs. And they have long been thought to be related to dinosaurs, but it wasn’t as certain until 1995 when a ‘missing link’ fossil was found. According to the Smithsonian, that put forth the idea there was a dinosaur millions of years ago that shared an important quality: having feathers. (source)

Are They Related to Dinosaurs?

Scientists have compared the amino acid sequence found in T. Rex collagen to a whole, wide database of the sequences of many, many modern and living species.

The result? A surprising similarity to that of chickens. Based on looks, you might think that alligators are more direct descendants of dinosaurs but it turns out that dinosaurs are more similar to chickens than gators. (source)

Professor Griffin explained that bird genomes are distinctive in that they have more tiny microchromosomes than any other vertebrate group. These small packages of gene-rich material are thought to have been present in their dinosaur ancestors.

The team found that the chicken has the most similar overall chromosome pattern to its avian dinosaur ancestor.

There was a study was carried out over four years by the international Avian Phylogenomics Consortium, in which they analyzed the entire genome structure of the chicken, turkey, Pekin duck, zebra finch, and budgerigar. And, in studying the data from a total of 21 avian genomes and one reptile species, they found a dinosaur ancestor for each chromosome. (source)

They also found that the fastest rate of change had occurred in the zebra finch and budgerigar, making them less closely related to the dinosaurs of old, while chickens had evolved the slowest, thus preserving their genetic similarity more than the others.

Usually what people mean when they say that chickens are dinosaurs or that birds are reptiles is that they are more closely related to dinosaurs and reptiles than anything else.

The answer to this question is a very complicated ‘no but also yes’ as there are several schools of thought and a few different classifications.

You are taught often to associate chickens as fowl, as they share many physical and aesthetic qualities with other birds and look nothing like other reptiles. And that is still true as a classification, but it is only one right answer.

At first glance, a chicken’s classification seems simple. Birds are birds, right? And a chicken doesn’t look a thing like a lizard of a snake. But it gets way more complicated.

Chickens seem to share commonalities with both mammals and reptiles, but it is commonly classified as something else: a fowl.

By one definition, reptile as a classification describes any vertebrates that have scales at least somewhere on their bodies, lay tough or hard-shelled eggs, have a bony internal skeleton, have internal lungs, etc. (source)

By that logic, snakes, crocodiles, alligators, turtles and lizards – and even birds – are reptiles.

These reptilian features each play an important part. For instance, scales trap in moisture under the skin, while eggs laid with hard shells protect babies from predators or environmental harm as well as from drying out while they grow inside the egg.

Reptiles, by definition, are not confined to just dry land or water. Some can thrive and reproduce solely in dry environments while others have adapted to living in the water, but still come ashore to lay eggs.

What’s missing from these descriptions though as it relates to chickens? Feathers, for one. The singing of songs for another. But that does not actually exclude them from a reptilian classification.

The Linnaean system was developed in the 1730’s. In it, organisms are grouped by characteristics and physical features, regardless of their ancestry. In this system, reptiles are strictly confined to being cold-blooded and having scales.

By those standards, birds are certainly not reptiles. Chickens are warm-blooded, meaning body temperature is regulated internally, with a normal body temperature being around 105 to 107 degrees Fahrenheit.

Their reptilian ancestry is an important part of what they are but does not come into play when classifying them since their physical appearance is way different.

Then come the 1940’s, and a new classification system called phylogenetics came into play. In this one, animals are classified only by their ancestry, and, in this case, physical characteristics are only used to help discover that ancestry.

So, by this system’s definition, you might think that a reptile is any animal descended from the original group called reptiles, a.k.a. dinosaurs. In fact, both birds and non-avian dinosaurs belonged to the clade Dinosauria

Since birds share ancestors sometimes with reptiles and reptile-like animals and are part of the group Diapsida, which also includes all other living reptiles (crocodilians, turtles, tuataras, snakes, and lizards, in this system birds were once considered to be reptiles. (source)

According the the University of Berkley, birds belong to the Archosauria clade. Reptiles don’t form a clade which means that the modern-day bird would still not be classified as a reptile. (source)

So, are chickens reptiles?

If, however, you subscribe to the school of thought that prioritizes ancestry, then chickens are reptiles, thanks to their first ancestors being the first reptiles.

How Did Chickens Evolve?

The first step in evolution is having a living ancestor. And while most dinosaurs were killed off and made extinct by that infamous giant meteor, some smaller species and subspecies survived, evolving onward to become an ancestor of the chicken. (source)

Taking it back about 320 million years ago, the first group of reptiles evolved. Then, about 40 million years later, a group that eventually became modern mammals branched off. (source)

Over the next 120 million years, other groups of reptiles split off – with particular survival and evolutionary success found in one branch called the archosaurs.

Archosaurs were the ancestors of dinosaurs and crocodiles, but, as other groups had branched off before and after them, they are only distantly related to modern-day snakes, lizards, and turtles.

65 million more years passed and there was that meteor strike – the infamous mass extinction event, killing all dinosaurs were killed except for one lone group of feathered dinosaurs.

Over the next 65 million years, this surviving group evolved into modern birds. This evolution, while a far cry from the original dinosaurs, means birds are today’s living descendants of dinosaurs, with the chicken being particularly close, still, genetically.

Thanks to research into improved gene trees, scientists found that birds had an explosion of species diversity right after the dinosaurs went extinct. (source)

And those beaks themselves are actually overgrown adaptations of a pair of tiny bones at the front of the face as birds needed to adapt to their changing environment and forage for food rather than tear at flesh. Over time, the jaw bones shrank and the beak grew longer. (source)

That fossil of a feathered dinosaur unearthed in China has given an invaluable look into the evolution from dinosaur to bird. (source)

That particular skeleton had a skull like a bird, a long tail and feather-like structures. After intensive testing and classification, it was determined that it was not a large bird but a dinosaur – the first feathered dinosaur to be discovered.

So the question of whether or not dinosaurs are chicken is a tough one to answer. They are inarguably closely related to dinosaurs – the genetics prove that. And, depending on which school of species classification you follow, they may well be modern dinosaurs themselves.