If you search for videos of cows and bells, you will find numerous clips of cows walking around wearing large bells around their necks. These bells are pretty loud, but do not seem to bother the cows. But why exactly are they wearing them?

Cows wear bells, called cowbells, mainly for safety reasons, but they are also decorative. The bells alert neighbors that the cows belong to someone. They also let their owners know the herd’s location across large areas of land.

However, not everyone is thrilled about the use of bells on animals! Many animal advocates argue that the bells are too heavy for the cows and that they hinder the cow’s ability to graze.

While the bells can be rather large, many cow owners say that the bells do not cause any issues for their cows. And, cow owners who use the bells swear by the added safety protection that bells bring to the herd.

Why do cows wear bells?

Safety is the number one reason why livestock owners put bells on their cows. The bells mainly tell neighbors that the cows are domesticated, friendly and owned by a local farmer.

You will see cows wearing bells mainly in Europe and Latin America, although some dairy cow owners in the United States will use them. Born mainly out of tradition, the practice helps livestock owners find their herds more easily.

This is important when cows roam across large areas of land, and during bouts of harsh weather when cows need to be brought back to the shelter of the farm. The owners simply follow the sound of the bells to find their cattle.

Apart from safety, farmers also have their cows wear bells because it is a part of their local tradition. The size of the cowbells and their ornamental decoration also reflect the wealth of the owner. The folklore in many communities includes beliefs that the bells can ward off evil. Cowbells even play a central role in many festivals throughout Europe.

Do bells annoy the cows?

Although they can be heavy, cows eventually get used to them. Farmers would not continue to make their cattle wear bells if they seemed to be bothered by them.

Some animal advocates argue that the bells are too loud and annoy the cows, but most cattle do not seem troubled by them. They continue to graze, drink, produce milk and thrive despite wearing a bell every day.

Some people think that bells are harmful to cows, causing hearing loss, weight loss, and other problems, but most cattle owners do not support these theories.

Animal advocates claim that the safety benefits claimed by cattle owners do not outweigh the harm that the bells can do to a cow’s hearing. Recently, cowbell opponents are suggesting using GPS devices on cattle instead. (source)

What is the meaning behind the ‘more cowbell’ joke?

You may have heard people randomly say “more cowbell” as a joke when listening to a song or being asked how something sounds. The joke originates from a popular skit of the same name on Saturday Night Live.

The premise of the skit is based on a real band and a ‘reimagination’ of the recording of their song, (Don’t fear) The Reaper. In the song, there is a faint sound of a cowbell and in the skit, the producer is pushing the cowbell as the key that will put this song at the top of the charts. After each recording, he continues to push the peculiar instrument and instructs the band that ‘more cowbell’ is needed. (source)

How is the bell normally affixed to the cow?

Bells are most often attached to a cow using a large collar. Leather collars tend to be used most often for safety; however, cattle owners can use nylon or vinyl collars if they prefer. The key is finding a collar that will fit comfortably around the cow’s neck and will not be easily removed by scratching.

Regardless of what kind of collar is used, the owner must check the fit regularly and adjust it as needed to prevent sores or other injury to the cow’s neck.

Is it a special type of bell?

Bells that cows and other livestock wear are different than regular dinner bells or jingle bells. Livestock and cowbells are far more heavy duty than ornamental holiday bells, and they are made to ring much louder.

Bells that livestock wear are meant to be heard from long distances away and they must ring loud enough to be heard over the normal sounds of the environment. The ring of the bell must be distinctive so that livestock owners can identify the bells, even if their animals are far away.

The size of the bell is typically dependent on tradition in a particular location as well as what is readily available.

Cattle owners do not put bells on calves because the calves are still growing, and the collars would have to be adjusted almost daily to account for their growth. The bells can also be distressing to a young calf.

Calves do not venture far from their mothers, so if the mother cow is wearing a bell, the cattle owner usually is not concerned about putting a bell on the calf. The calf’s main concern should be eating and growing, not worrying about a bell around their necks.

Where to buy livestock bells?

Cowbells or other livestock bells are relatively easy to find at local livestock feed stores, however, the internet is always the easiest way to find the right one for your situation.

Not all bells are created equal and you should find the one that works best with your animal. Cattle will need a larger bell, while goats, sheep, and dogs will need a smaller bell.

Here are some good options on Amazon.com

What other animals wear bells?

Bells are not exclusively used on cows, even though many people refer to them specifically as cowbells. Livestock owners also put bells on their goats, sheep and even reindeer. (source)

Cowbells are not even exclusively used on livestock! Some dog owners that take their dogs on hikes will often put a small cowbell on their dog’s collar. This helps them easily locate their dogs if they get too far ahead or run off chasing a squirrel.

What else can a cowbell be used for?

Another alternative use for a cowbell is to used it on a bike as a bear bell. Bikers will often attach a cowbell to their bike that will ring as they ride through trails in the wilderness. They say that the loudness of the cowbell helps to keep bears away.

Bikers often ride fast through the woods and can easily run up on a bear or other wild animal crossing their paths.

The bell warns the bear that something strange is approaching and they will normally leave the area before the biker arrives. Bear Bell for Bikes

Cows wear bells mainly because it helps keep them safe. Many animal rights advocates argue that the bells are detrimental to the animal’s health, however, livestock owners around the world will tell you time and again how the bells help save their animal’s lives. 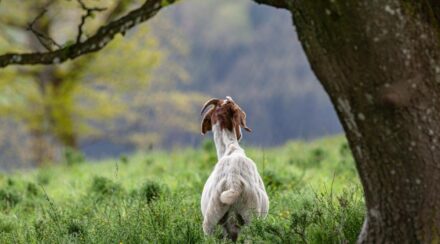 Can You Have Just One Goat? 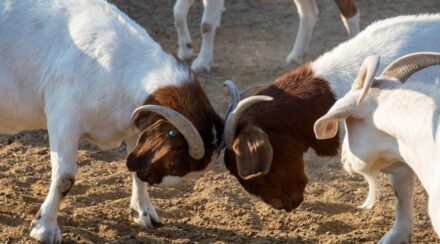 Goat Behavior: Why They Paw, Stomp, Bite, Headbutt and Act Out 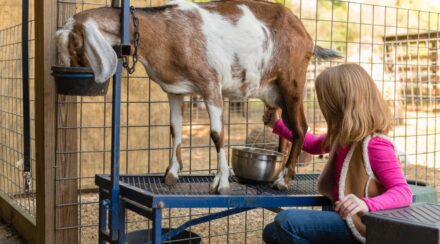