There’s almost nothing cuter than a sleepy animal. And while we most often think of snuggly little mammals, like puppies or even pandas, we kind of skim over the birds! Especially with waterfowl, since they tend to be both land and sea critters, where do ducks sleep?

Ducks are flexible when it comes to deciding where to sleep. Some breeds, such as the Mallard, will sleep both on land and on the water, with preferences changing with seasons and environmental factors. Other breeds, such as Muscovy ducks, will only roost on land.

Ducks, much like toddlers, need nap times throughout the day. They aren’t fully confined to nighttime sleeping and will utilize the concept of power napping at intervals, usually following periods of foraging and then grooming and preening their feathers.

Studies were done on the brainwaves of ducks as they slept and found some interesting info about their sleeping habits.

For example, when it comes to sleeping at night, ducks tend to sleep together in a group setting, even going so far in organization as to sleep lined up in a row.

Those birds that make up the end spots of the line are primed for light sleeping, and will be alert to movement nearby. This allows the ducks to be efficient in having designated guards, so the whole flock can be roused if danger is indeed detected.

What’s more, the ducks have a sense of fair play and will rotate out the sentinel fowl.

When Do Ducks Sleep?

But ducks aren’t always sleeping at night, as we do. In fact, they are pretty active nocturnally, moving locations under cover of darkness a lot, especially if the weather is not too severe.

While ducks may not have a reputation for being the brightest of Mother Nature’s beings, they have certainly worked out sleep schedules that work best for them and allow them to survive in the wild.

Can Ducks Sleep and Swim?

Ducks in the wild absolutely catch up on sleeping right on the water. Bopping along at night on their favorite pond, they may have indeed inspired the term “sitting ducks” but they are actually not in too great a danger, as eagles and hawks (their main predators) also sleep at night!

Further, the water is actually a very good threat detector for ducks, as anything that would be swimming towards them to chow down would send ripples and vibrations through the water, alerting the ducks to an incoming threat.

Domesticated ducks don’t actually need a pond or water (aside from drinking sources) to be happy, therefore you need not worry about your farm-living duck needing water to sleep in.

All you really need is a coop with some comfy areas, so they have a sheltered place to sleep and are safely hidden from hungry predators.

Because ducks don’t really roost, they are perfectly content to snooze on some soft straw or shavings strewn about on the floor.

In fact, they don’t really even need nesting boxes, because they tend to prefer to make their own nest in a corner of their choosing.

Ducks also are more pretty well designed to deal with the cold and enjoy cooler temperatures over heat. No matter what, though, they do need to be locked up at night in a secure shelter to protect them.

And, unlike other farm fowl such as chickens, ducks are semi-nocturnal, meaning they move around during the night.

What that means in terms of coop building is that they produce a fair bit of moisture by breathing at night, so do be sure there is proper ventilation. Otherwise, that excess buildup of moisture can lead to some respiratory issues for your birds.

What about their legs?

Ducks often sleep on one leg, when they are chilling on dry land. Though they can be truly asleep or they are merely relaxed, the “one legged” deal has to do with conserving body heat. If there is one less leg exposed to the elements, there is less body heat lost.

This adaptation is called “rete mirabile” and the arteries that bring warm blood to ducks’ legs lie next to the veins that return the colder blood to the heart. Since the arteries warm the veins, standing on one leg reduces the amount of heat lost out through limbs not covered by feathers.

What is single hemisphere (or unihemisphere sleeping) is a pretty neat trick: they literally can have one half of their brain sleep at a time, with the other half remaining awake.

Ducks have developed the ability to perform this nifty trick so that they can stay alert for predators while still getting some much needed shut eye. Different parts of the vertebrate brain, single hemisphere sleeping proves, can actually sleep independently of each other.

Going back to ducks sleeping in a row, the ducks in the center not on “guard duty”, too, are free to sleep with both hemispheres of the brain while the lookout birds utilize the single hemispheric sleeping adaptation.

One of the hemispheres of the brains of these outside ducks stays functioning at 100% capacity while the other side of the brain puts itself into sleep mode.

Ducks have the impressive ability to sleep with half the brain at a time, while the other half is active and fully responsive to the environment.

Since prey birds are never completely safe, the ability to literally sleep with one eye open is all but a necessity.

Unlike in humans, whose eyes send information back to the full brain, some birds’ brain sides correspond only to one eye, with each eye only sending information to one side of the brain.

The unihemispheric sleep means birds can allow for one hemisphere of their brain to power down and go to sleep while the other side stays awake and alert.

To prove that ducks utilize single hemisphere sleeping, scientists placed four ducks in a single row of individual clear tanks and allowed them to fall asleep.

Almost without fail, ducks that were sleeping in the middle tanks would sleep with both eyes shut, while the ducks in the end tanks would keep one eye open.

Researchers would rotate the ducks, too, to different spots, and, every time, the birds in the middle would sleep with both eyes closed and the birds on the end would correspond their open eye to match their position: if they were on the right end, the right eye would stay open, and vice versa.

The scientists measured brain activity and found that the side of the brain that controlled the open eye maintained the same activity levels of an awake bird, while the other side of the brain activity matched typical characteristics of sleep. And, even with just the one eye open, the birds would react to simulated warning signs of a predator in less than a fifth of a second.

Birds can even turn single hemisphere sleeping on and off depending on how safe they determine that their location is. Scientists even speculate that some birds use unihemispheric sleeping to catch up on sleep while flying!

The eyes have it

Much like Metallica advises, ducks sleep with one eye open. A study published in 1999 in the scientific journal “Nature” proved that since ducks can sleep with half of their brain at a time (the above mentioned single hemisphere sleeping), the other half of their brain keeps that associated eye open, too, so it is on the lookout for predators.

A later interview with the study’s lead scientist, Niles C. Rattenborg, had him elaborate that: “Birds sleeping under risky conditions spend more time with one eye open and half the brain awake.”

That plays into those sleeping rows of ducks, with the single hemisphere sleeping sentinels on either end keeping the eye closest to the other ducks closed, with the other eye facing outwards from the line stays open. 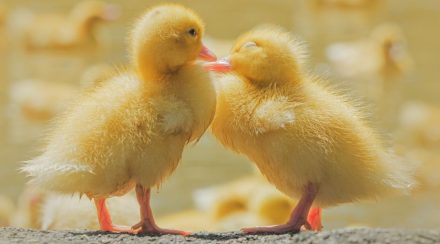 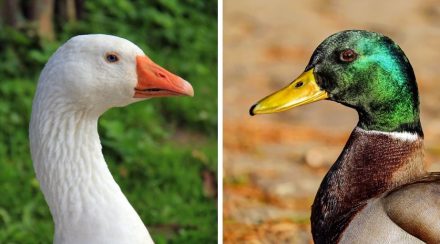 Are Geese Ducks? Geese vs. Ducks 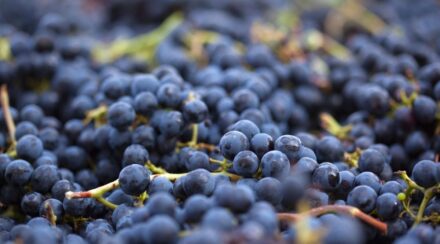