Do Cows Need Their Hooves Trimmed?

Raising cows can be a rewarding adventure, but there is one aspect of cattle farming that is often unfamiliar to new cattle owners.

Do Cows Need Their Hooves Trimmed?

Knowing when and why to keep cows hooves trimmed and healthy is important to the overall health of most cattle farms.

Cows have cloven hooves, which means there are two separate claws or toes that make up each hoof.

It is important that these two toes are flat on the bottom and even on each foot to help a cow maintain its balance.

Most cattle farms should have a hoof trimming plan in place to prevent hoof issues and keep them from becoming an expensive and debilitating problem for the herd.

Why Do Cows Need Their Hooves Trimmed?

When they grow too long, the uneven hooves alter the way the cow walks and can cause temporary or even permanent lameness.

Older cows, cow with hoof-related issues, and cows that stand on hard or soft surfaces will need their hooves trimmed often to keep them healthy. (source)

Cows that are unable to walk or run due to overgrown hooves will become easy prey for predators.

These cows will also have a harder time getting to their food and water supply.

Cows that have toes that turn inward or grow abnormally will need hoof trimming to prevent severe walking issues.

Beef cows naturally do not need their hooves trimmed regularly or even at all in many cases.

Their genetics along with their lifestyle spent walking in pastures help keep their hooves relatively short.

Some beef cows do have genetic abnormalities such as curly toe syndrome that causes their split toe hooves to curl up and even grow over each other.

Beef cows that suffer from this issue and other hoof-related issues may need their hooves trimmed yearly or biannually.

Although hoof trimming is not a regular chore when raising beef cattle, it may be necessary for some cows.

It is important to check a beef cow’s hooves occasionally and especially if they are having trouble walking.

Dairy cows, unlike most beef cattle, do need their hooves trimmed regularly.

Most dairy cow farms utilize the cows for milk production. Hoof trimming is a vital part of the operation.

Dairy cows spend a lot of their time in barns with concrete floors and it is important that they stay as comfortable as possible.

A cow’s hooves can grow up to 2 inches each year and if they are not trimmed regularly, the animal will experience pain, stress, and even lameness.

Hoof overgrowth in dairy cattle will result in lower milk production and a decline in overall health.

To keep dairy cows producing and healthy, most dairy farmers have a regular hoof trimming plan in place for their farm. (source)

How Often Do Cows Need their Hooves Trimmed?

In general, a cow’s hooves should be trimmed at least twice per year, usually about every six months.

Some cows may need their hooves trimmed more often than that, especially those that suffer from curly toe syndrome or hoof diseases.

Even if it looks like a cow’s hooves do not need trimming, many farmers have their cows hooves checked biannually for cracks or other issues. (source)

How Do You Know If a Cow’s Hooves Need to be Trimmed?

Often, if their hooves are overgrown, it is easy to see during a quick visual inspection of the cow.

Discomfort when standing, walking issues, and complete lameness are all indications that something may be happening with their hooves.

If other potential illnesses are ruled out, consider having a professional check the cow’s hooves for overgrowth, cracks, or other problems that can be easily remedied with a trim.

How Much Does It Cost to Have a Cow’s Hooves Trimmed?

The cost to have a cow’s hooves professionally trimmed can vary according to location, but it is sometimes cheaper than you may think.

Many professional farriers, hoof trimmers, will charge a mileage fee for the trip and for long distances, but on average they charge between $10 and $25 per cow.

Cows that need extensive trimming and correction, or wrapping will cost more.

Veterinarians may charge more, especially if they are treating the hooves for medical conditions as well.

Many dairy farmers, especially large scale operations, will invest in hoof trimming equipment and training for their employees to keep overall trimming costs as low as possible.

Can You Trim Cow Hooves Yourself?

If you have been professionally trained and have ample experience in trimming cattle hooves, then by all means, yes!

Otherwise, cow hoof trimming is best left to the professionals.

There is a lot that goes into trimming a cow’s hooves and it is more in depth that it may appear.

It is important to have either a professional farrier or a licensed veterinarian perform the hoof trimming on your cattle to make sure they are done correctly.

Poorly trimmed hooves can be just as dangerous and debilitating as overgrown hooves when it comes to cattle. (source)

Most cows will not stand still for a hoof trim and it can be a dangerous job for all involved.

A hoof trimming chute, also called a tilt table, is designed to contain the cow and tilt them over on their sides so that their feet are easily accessible.

They are strapped into the contraption to keep the cow and the farrier safe for the duration of the trim. (source)

Veterinarians may use this type of chutes, ropes, or sedation to trim cattle hooves.

Although the majority of beef cattle may not need trimming, it is still important to keep their hoof health and growth in check.

Dairy cows as well as those cows that have genetic hoof growth issues like curly toe syndrome will need regular hoof trimming to keep them in optimal condition.

The cost to treat the medical issues that hoof overgrowth causes are far more expensive than having their hooves trimmed before they become a problem. 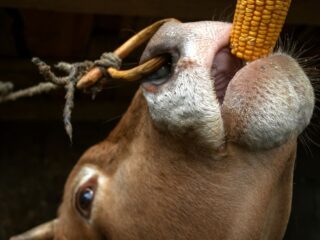 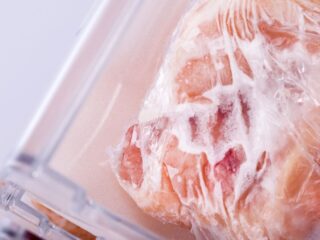 Should Frozen Chicken Have a Smell?
Read Next Post →
Comments are closed.