Most of us know that female cows can have baby calves, but most of us are unfamiliar with a cow’s reproductive system. Cows, like humans, are mammals which means that they share a somewhat similar reproductive process, but does that mean that they have periods like human females do?

Do cows have periods? Cows do not have periods but they do have heat cycles. They can bleed during their estrus cycle, which is often mistaken for a period.

The term period is a human reference to a female’s monthly menstruation, the bleeding that occurs if a woman does not become pregnant during their monthly reproductive cycle.

Cows do not menstruate; therefore they do not have a period.

A female cow has a monthly cycle, but it is not exactly the same as the cycle that women go through each month. If you own cattle, it is important to understand how cows reproduce and the hormonal changes they will experience throughout each month.

The success of your farm will often depend on your knowledge of a cow’s reproductive cycle and how you apply that knowledge to your own herd.

Yes, a female cow and an intact male cow, also called a bull, can and will breed when they both reach a certain age and the female is fertile. Therefore, it is important to separate male calves from their mother or siblings around the time he reaches six months old, to prevent any unwanted bovine pregnancies.

Cattle owners can also have a veterinarian castrate a male calf, a process that removes a bull’s ability to breed going forward. One fun fact about cattle herds is that it only takes one fertile male bull to breed a large herd of cows. (source)

What is the reproductive cycle of a cow?

A cow’s reproductive cycle, also called the estrous cycle, has various stages that progress naturally depending on whether or not the cow is successfully bred.

The cycle begins with the estrus stage, when the cow is considered to be ‘in heat’, meaning they are fertile and able to be bred by a bull. If the cow is not successfully bred during this stage, then the cow’s reproductive system will then move into the metestrus and then the diestrus stage.

During these two stages, the cow is not fertile and cannot be bred. As a cow’s hormonal levels change, the cow will enter the proestrus stage, where its body will again prepare for possible fertilization in the upcoming estrus stage. (source)

If cows do not have periods, why do they bleed?

Regardless of what you may have been told, cows do not have periods, but they may bleed some during their monthly cycle.

In the days immediately following the estrus stage, a cow may bleed but do not mistake that for menstruation; it is not the same thing.

The bleeding could indicate a successful fertilization, or it could just be naturally bleeding that occurs from breeding.

How often are cows in heat?

Cows come into heat every 17 to 24 days, sometimes longer depending on the cow.

Typically, you can expect a cow’s heat cycle to begin around the 21-day mark.

Once a cow is truly in heat, they will typically stand still for a bull to breed with them for about 10 hours. They are fertile during this time, as a cow will ovulate around 25 hours or so after its standing heat. (source)

6 Signs Your Cow May Be In Heat

Do you wonder how you will know if your cow is in heat? According to Select Sires, the premier service for finding a mate for your cow, there are many indicators a cow might give letting you know she’s reached the fertile period in her cycle. These include:

The most obvious sign that a cow is in heat is that she stands still while being mounted by a bull or even another cow.

If she were not in heat, she typically would not stand when another cow tried to mount her.

Heifers that are going through their first heat are more likely to mount other female cows due to their inexperience with their new hormones.

Another noticeable sign of estrus is a swollen vulva, a female cow’s private area. As the cow’s estrogen levels increase, the blood flow to the reproductive parts will increase as well, causing the swelling.

You may also notice that the area is darker in color as opposed to when the cow is not in heat.

One of the most important indicators that a cow is in heat is a mucus discharge from the cow’s vaginal area. You may see a string of mucous or you may notice dried discharge on a cow’s tail or legs.

You may notice certain cows grouping off together along with a bull, or you may just spot your bull away from the herd with another cow. This is a good indicator that the bull and cow or cows are ‘dating’ and one or all of the cows are in heat.

Cows that are in heat will often be restless, moving around the pasture and often bellowing repeatedly. Their hormones cause them to act noticeably different than they normally do.

Although it is awkward to discuss, it is a noticeable sign that you should look out for when monitoring your cows. Often, as they come into heat, a female cow or heifer will lick the private areas of other female cows.

What age do cattle first come into heat?

Young female cows who have never had a calf before, referred to as heifers, can have their first heat sometime between 9 months and 2 years of age.

You begin watching for signs of heat in heifers at around 6 months so that you can separate them from the intact males. (source)

Should you let a cow get bred on her first heat?

If at all possible, you should not let a heifer get bred on her first heat. Young heifers are not considered mature until the age of 2 or 3. If you allow a heifer to get pregnant on her first heat, she may be less than 2 years old when she gives birth.

Pregnancy and birth put a lot of stress on a heifer and if she is too young, it can wreak havoc on her body.

Too early pregnancies also have a higher occurrence of miscarriage and birthing issues, so if possible, it is better to wait and keep younger cows separated from the bulls.

Is there a way to make a cow go into heat?

There are a couple of ways to bring a cow into heat. The easiest way is to wait and let nature take its course and as long as the cow is healthy, its heat will come naturally.

Another way to bring a cow into heat earlier than normal is to give them an injection of prostaglandin, a hormone that causes the reproductive cycle to speed up. (source)

One other common method, sworn by amongst livelong cattle ranchers, is to put the cow around a bull or around other cows that are in heat or coming into their estrus stage.

Many ranchers swear by those processes to bring a cow into heat without using medication.

Cows do not have periods, but they do experience bleeding during their reproductive cycle and it can often be an indication that they have moved past the ‘in heat’ estrus stage of their cycle. It is important to watch for the signs of estrus in cows so that you can determine when they need to be put in the same enclosure as a bull. If bleeding is occurring, the estrus, or heat, stage has probably already passed. 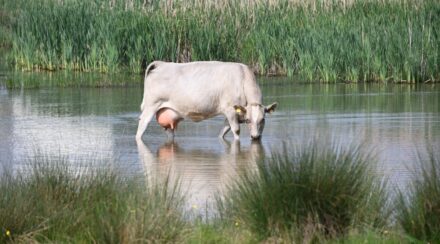 Do Cows Sweat? Tips for Keeping Your Cows Cool 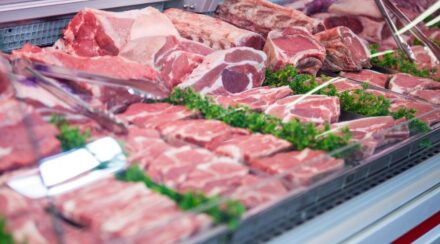 Why Do Cows Moo At Night?