Many small-holding owners choose chickens as a dual-purpose addition for their homestead, egg production, or/and meat and as part of their farm family.

Sometimes they choose them purely because they are great animals to have, especially the adorable ones with the feathered feet.

Like people who prefer a specific type of dog, cat, or other animal, chickens also have various breeds from which to choose.

Chickens with feathered feet have become very popular and regarded as novelty birds. They are often kept as show chickens and entered into poultry shows. They make lovely pets, are beautifully colored and are adorable with their bootleg-looking feathery feet and legs.

In this article we will discuss different types of chickens, all of them with feathered feet. This list includes fowl and true Bantam chicken breeds.

If you thought chickens are just ordinary animals, you would be pretty amazed at some of the different breeds out there.

Faverolles originated in North Central France in the 1860s in Faverolles and Houdan village. They are primarily used as ornamental chickens and not as a food source.

These chickens are very gentle and come in a variety of colors like salmon and white. Faverolles were bred in France to provide eggs for the winter.

This breed is rare these days and mainly raised for novelty. They have feathery feet and legs and are also known for their beard and muff. T

he females are usually brown, cream, and salmon, whereas the males are more maroon and straw-colored with dark markings.

The chicks are very fluffy and also have fuzz on their legs and feet. Faverolles chickens prefer a cold, wintery environment. The Livestock Conservancy has listed this breed as “threatened.”

A Cochin chicken originates from China and is one of the largest chicken breeds in the world.

Cochins are known as backyard chickens and rarely used commercially. These chickens are easily maintained and produce a sufficient number of eggs for domestic use.

Cochin chickens have an amiable and relaxed nature. You could even invite them into your home, and it won’t be long until they are so comfortable. They’ll invite themselves in.

Cochins love the cold due to their thick feathers. A cochin’s eggs are usually brown and very big. The shell of a cochin egg is fragile and thin, that many of them break during incubation.

Even the name suggests the royalty of this breed, and they were popular with Turkey’s royals. Sultan chickens are also known as ‘Sultans Fowl.’ They are often entered into shows due to their exotic looks.

Sultan chickens have minimal egg production, therefore, are seldom kept as a source of food. They have a puffy crest, muffs, thick feathers, and legs that resemble a feather duster.

These birds are primarily pure white but can also be blue or black, and instead of having four toes like a regular chicken, they have five toes.

These chickens are closely related to cochin chickens. They are just as docile and relaxed as the Cochin chicken breed. They also have thick feathery feet.

Brahma chickens are bred for their egg and meat, and they are one of the largest chicken breeds in the world. Brahma’s mostly lay eggs in the winter, and their eggs are relatively small.

Due to their calm demeanor, Brahma chickens are often bullied by other, larger chickens, and they don’t fight back.

The Pekin is part of the bantam chicken breed and is also referred to as Pekin Bantam chickens. They are pretty small in size, which makes them perfect pets for small gardens.

Bantam Pekin Chickens are easy to tame, great with small children, and have an amicable and docile temperament.

When Pekin chickens are young, they are very calm and gentle, but they can become quite aggressive because of their protective nature as they get older. A Pekin originates from Perking, which we know today as Beijing.

The list keeps growing as breeders are endlessly trying to achieve new colors. Pekins are quite round in shape, and they have long feathers on their feet.

Belgian D’Uccle’s originates in central Belgium in a town called Uccle. They are one in a group of eleven Belgian true bantam breeds.

Sadly, only 168 of these birds were counted in all of Belgium in 2010 and are on the verge of extinction.

They have a single comb, orange or red eyes, a beard, and a muff all around their head. Their muff almost gives them a similar appearance to an owl.

Belgian D’Uccle comes in various colors such as white, porcelain, and Mille Fleurs (mahogany/reddish-brown). Their feathers are crescent shapes that are black and end in a white V-shaped tip.

Their feathers almost look like living flowers because of their beautiful patterns.

They are tiny chickens with lovely, friendly personalities. They are very curious, and they love to interact with people.

They only produce about 150-200 eggs a year and are considered lazy egg layers. They lay most of their eggs in winter as opposed to the other seasons.

The Silkie originated in China and is alternatively known as “Chinese Silk Children.” Silkies have a very fluffy plumage, and they feel quite silky.

Silkies are somewhat different from other feather-footed chickens. They have five toes instead of four, black skin and bones, blue earlobes, a bluish tint to their flesh, and are often seen in poultry shows.

These birds are very friendly and are considered to be the most docile out of all the poultry. The hens lay tinted or cream-colored eggs, make wonderful mothers, and they also help to hatch eggs of different types of bird species.

Named the ‘supermodel Bantam,’ these little chickens are in a class of their own. They are also known as Sabelpoot, Dutch Booted Bantam and Nederlandse Sabelpootkriel.

This breed originated in the Netherlands and is classified as a true Bantam.

They are named ‘booted’ due to their bell-bottom-looking, feathery feet. Booted Bantam has an amiable and calm nature, makes great mothers, broods easily, and is good egg layers.

Booted bantams make excellent pets, as they are good with children and get on well with other chickens.

These are small birds, and they are often kept as show chickens in poultry shows.

The Copper Maran is considered an ancient breed of chicken and originated in the South of France in a port town called Marans.

They became very popular in the 1800s and 1900s because of their exotic dark red or chocolate brown eggs and were only recognized in America in 2011.

They are very friendly and docile, good with children, although they do not like to be chased.

Copper Marans lay three eggs a week and are the only ones with feathered feet.

Now you know that if you live on a farm or a small-holding, and you are looking for adorable, dual-purpose pets, there is a whole list of beautiful feather-footed chickens to choose from. You need to make sure which type of bird will be best suited for you.

Even if you are not planning to keep them primarily as a food source for meat and eggs and want to start collecting show chickens, these colorful birds will be perfect for starting your collection.

Whether you want big ones or small ones, they are all fantastic animals and a wonderful addition to any family. 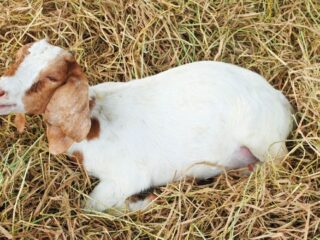 What Does It Mean When A Goat Is Shaking/Shivering?
← Read Last Post 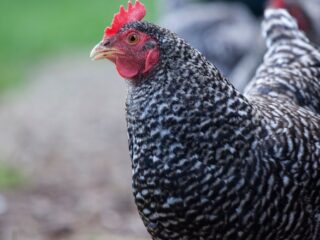