Can a Llama Kill a Wolf?

Llamas have gained notoriety over the years as being a potential guard animal for livestock farms across the country. Their effectiveness is proven, however, how do they fare against a wolf?

Can a Llama Kill a Wolf?

It is possible for a llama to kill a wolf but this isn’t typical. Llamas are taller than wolves, however, they do not pose a huge threat to the predator. Llamas may be able to protect their livestock and possibly even run off a wolf, but more than likely, they will not kill a wolf.

Llamas are able to kill some predatory animals but wolves do not usually fall into that category. It is important to know the limits of a llama when it comes to wolves and how to protect them and your livestock if wolves begin to cause a problem on your property.

Why Can a Llama Not Kill a Wolf?

Wolves are large animals that can weigh anywhere from 30 to 175 pounds! They are strong, agile, and can effectively kill prey animals that are much larger than themselves including moose, deer, elk, caribou, and even llamas.

Wolves tend to travel in packs and rarely would be fighting alone against a guard llama.

A llama, in the right circumstances, may be able to severely injure and even kill a lone wolf that was not in its prime.

For the most part, however, a lone llama would not pose a huge threat to the wolf, but may just be angry enough to scare off a wolf or small inexperienced pack of wolves.

Can a Llama Kill a Dog?

Llamas can kill a dog if it is threatening the llama or the livestock the llama is protecting. A dog is often no match for a large llama thanks to its larger size and dangerous hooves.

Dogs are not as effective of hunters as wolves are and will sometimes fall prey to the hooves on a llama.

What Predators Can Llamas Kill?

Llamas can kill a variety of predators that may attack them or the livestock in the pasture. Llamas have been known to kill foxes and coyotes that prey upon their small livestock including calves, goats, and sheep.

Guard llamas can also kill wild or domesticated dogs that dare to mess with livestock. Single guard llamas do not always fare well against packs of animals like wolves or dogs, but they can still be effective in scaring them off for the most part.

How Do Llamas Kill Predators?

Are Wolves Afraid of Llamas?

Wolves are not necessarily afraid of llamas, but they do tend to steer clear of them. Wolves are often looking for an easy meal and a llama makes their hunting very time consuming and difficult.

Many farmers agree that having a guard llama seemed to deter wolves from hunting their livestock as frequently.

Unfortunately, yes, wolves can kill llamas and they often kill more than one at a time. In the state of Montana in 2019, a pack of wolves was said to have killed up to eight llamas in the same vicinity in a single night.

When wolves are starving and traveling in packs, a llama or even a group of llamas may be an easy meal for them.

Wolves are superb hunters and they know how to effectively wear down their prey even if it is exponentially larger than they are.

Llamas can easily be killed by wolves if the conditions are right and the wolves are very hungry. The wolves will pick off the slower llama, typically the older or youngest ones.

Why are Llamas Good Guard Animals?

Llamas make excellent guard animals because they instinctually guard the perimeter of the pasture.

When necessary, they will attack predatory animals or even people that come into the pasture unwelcome. They make loud sounds when alarmed, they run towards the danger, and they will kick at intruders until the threat is gone.

Do Males or Females Makes the Best Guard Llama?

Regardless of which one you choose for your farm, only one llamas is needed per pasture. Multiple intended ‘guard’ llamas in the same pasture will bond with each other instead of the livestock you intend for them to protect.

5 Ways to Protect Your Llama from Wolves and Other Predators

It is difficult to protect any livestock including llamas that live in pastures from the grasp of a wolf or a pack of wolves. When wolves are on the prowl, even a guard llama can use all the help it can get.

Besides having the llama itself which offers some protection, it is good to also have a secure fence that limits predatory activity. No fence is one hundred percent safe from wolves, but the less chance for a wolf to break through, the better.

When livestock dies from illness, injury, or natural causes, remove it from the pasture as soon as possible. Leaving the decaying carcass in the pasture will only serve to attract predators like wolves and they may continue to come back after the dead animal is gone.

3. Bring livestock to a barn when injured or in labor.

Wolves are more likely to attack livestock that is in distress. This includes those that are giving birth, have just given birth, or are injured and unable to move quickly. Bring these animals into to barn or a secured enclosure that is extra safe from predators.

Whether on horseback or on an all-terrain vehicle of some kind, check on your livestock in the pasture at least daily if not multiple times, especially if you are having predator issues. Your presence alone could be enough to dissuade a pack of wolves from messing with your herd.

Sometimes, a guard llama will need a little help. Since having two guard llamas in the same pasture is not recommended, the next best solution is a guard dog or pair of guard dogs. A good guard dog or two will help the llama maintain the status quo and better help fend off wolves. Just make sure they do not get in the llama’s way.

Llamas can make excellent guard animals that will protect your livestock and even kill predators that try to attack them.

They cannot, usually, kill wolves although they can still be effective in fending off a wolf. If wolves start causing issues on your farm, help your guard llama out and do what you can to keep the wolves at bay.

Learning about llamas and how they handle predators like wolves is an interesting and consuming subject. Here are the resources used in this specific article. 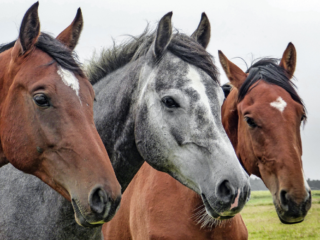 Do Livestock Trailers Have Titles? 4 Things You Need To Know
Read Next Post →
Comments are closed.